This past October 9th and 10th I was lucky enough to get to attend the AIGA GAIN National Conference. This year the two-day affair was held at Yerba Buena Center for the Arts, a mere 2 blocks from my school, and I bought student tickets early enough in advance that they only cost an arm, not an arm and a leg. 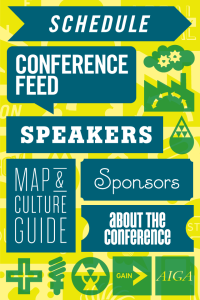 The schedule kept me hopping—it was a Tuesday and Wednesday, which is when I have a total of 9 hours of classes, but I managed to go to all of the talks, two full classes and half an hour of the third class, and finish my homework! Not much sleep at all in those 48 hours, but I have to say it was definitely worth while. I thought AIGA did a phenomenal job of lining up speakers, and except for the very last session I thought everyone had something really interesting and inspiring to say. So often I’ve heard design speakers who are good, but end up repeating advice that I’ve heard over and over again, or has a story that isn’t particularly engaging or unusual.

This year the theme was social good, so all the presentations revolved in some way about the role that design can play in helping improve society. I noticed a lot of audience members taking notes in some way shape or form, often on ipads or laptops. Since this year I’m the Director of Communications for the AAU AIGA student group, I decided to take my notes by live-tweeting the event under the @AAUAIGA twitter handle. It was actually a lot of fun, especially the interaction with the other tweeters in the audience. It felt like we were having a conversation about the conference, getting opinions and feedback, while it was still taking place.

Below is my twitter stream for the two day conference. It’s a bit long, but there are lots of links to the various projects mentioned during the talks, retweets from other designers who attended GAIN, and some hopefully interesting and insightful quotes from the speakers. Enjoy!

Kicking off the #GainConference general session! Excited and lucky to have it in our backyard at the YBCA pic.twitter.com/zDlJ1KWs